Despite being in no condition to move thanks to Vicodin and an extreme amount of anger......... the next day came with me waiting by the front door ready to move at turtle speed down to the barn to go see that Liam horse get ridden.

The young college student that they had chosen to ride him was the girl that used to ride him before he left the stables the first time. She was a boarder that had just come back with her horse from her summer break.

She had a gentle spirit. Her love for him was transparent there was no hidden agenda. No harsh touch and no ill spoken words.

It hurt to breathe. It hurt to be up and moving around. It hurt immensely that they had rushed this day by three months............but in the midst of all this hurt......there was comfort. Knowing he was in the hands of someone who obviously loved him dearly was.....a relief. 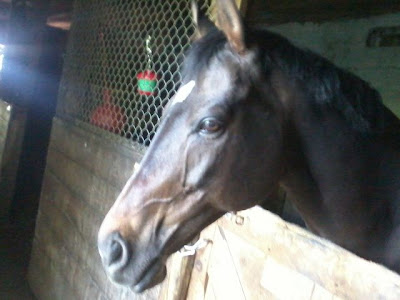 He was still grossly underweight. To protect his spine a gel pad was required as well as pads to bump up the front and back of the saddle.

He seemed worried and confused. He and his young rider obviously had history. It seemed to be nothing but good history.....But he was still a monster as usual on the crossties.

With the barn buzzing with anxious energy I was so relieved to see his young rider was not swayed by his vicious threats to kick and bite.


I gimped my way into the indoor arena and took my seat. I was glad to be alone for a moment because the wide array of emotions brought on by happiness/anger/the feeling of injustice/happy pills was more than I could stand.

What would happen to this Liam horse??? I felt as if this was indeed the beginning of the end. Somehow I had tricked myself into thinking that our time together had no ending. But this was the harsh wakeup call I needed. He would be transformed into a lesson horse.....or even worse still.....the Liam horse would be sold and taken somewhere far from here where I would never again lay eyes on him......

I could feel the tears forming.....but when the gate to the indoor arena swung open and she walked him in the ring all dressed up.......the movement of my cheeks caused by the huge smile forced those tears to fall out.

He wasn't very patient at the mounting block. His young rider had mounted and was going to put her right foot in the stirrup when he decided it was time to go.

He had this weird head bob thing going on which was very odd to me because I had never seen another horse do it. With every step he took he nodded....very odd.

The warm up and ride lasted less than thirty minutes. With tears in my eyes and emotions that to this day I can never explain in words I recorded the ride.

The love she had for him was evident. She took everything off of him and thanked him for being such a good boy and then walked him to the upper barn…..oh by the way we forgot to tell you he was moved out of your barn because that’s for boarders. He now lives with the lesson horses in the upper barn….....</3
Posted by Unknown at 11:23 AM